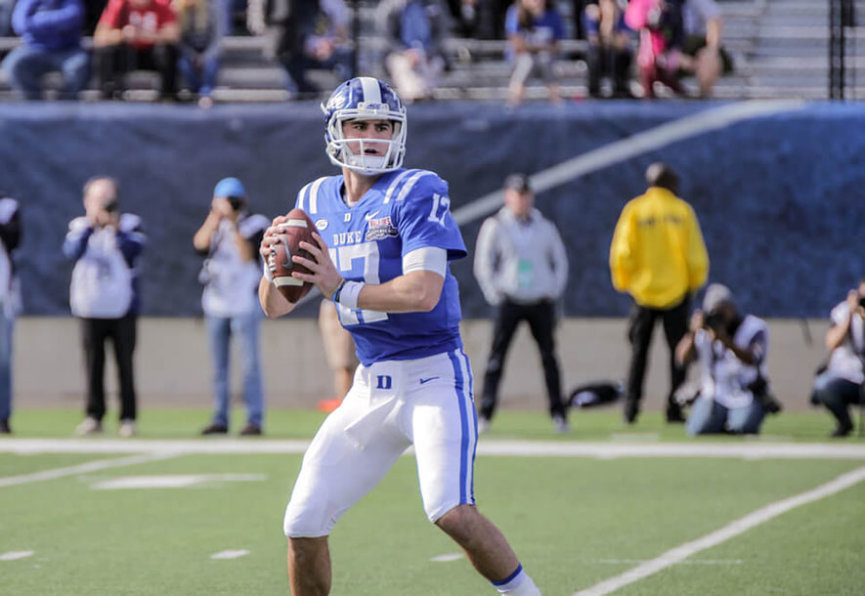 It was expected to happen. At some point during the 2019 NFL season, the New York Giants were expected to sit their longtime franchise quarterback, Eli Manning, for rookie Daniel Jones—and they have. Manning will be on the bench this week when the team takes on the Buccaneers in Tampa Bay. Rookie Daniel Jones will make his first NFL start.

How to bet on Eli Manning And Daniel Jones? bertoncelj / Shutterstock.com

Such a move, while expected at some point during the year, still generates a ton of questions. Many of them relate to one general concept—now what? What does the future look like for Manning this season and Jones this week?

Of course, several sportsbooks are offering a variety of prop bets about just that.

On the one hand, to do so would be a logical move. Trade Eli Manning and the position clearly belongs to Jones, and he doesn’t have to worry about being pulled for a bad game. But trading away a player as iconic with his franchise as Manning is would be blasphemous to many fans.

For those with a strong enough opinion, one way or the other, BetOnline.ag is offering:

Will Eli Manning be traded during the regular season?

The Giants have waited this long to bench him out of respect. There is no reason to think they will treat him any differently now.  By keeping him, he will be able to do what every player longs to do (see next question).

He is no longer a starting quarterback in the NFL. When he does play, he is not nearly as effective as he used to be. Come January, he will turn 39. That alone should answer this next question found at BetOnline.ag:

Will Eli Manning retire after season?

He’s one of those guys that has talked the never-ending talk, but hopefully, his brother can help him see the writing on the wall at the end of the season

It is time Eli. Walk away with grace.

Should he make his decision to retire before the end of the season, if he told the team, they would probably let him start against the Eagles in Week 17. It’s a home game which would make it the perfect backdrop to make his retirement announcement at the end of the game.

But if Jones turns the team around and they are in contention for a wild card spot, the answer to this one is going to be no:

Making the playoffs would be nice for the Giants, but fans shouldn’t bank on it happening.

Now that he is getting his first start, it is time to ask the question everyone wants the answer to—how is he going to play? Bodog is offering a few prop bets along those lines:

The team will look to protect him as much as they can, but at the same time, they are going to want to see him play. It wouldn’t be shocking if he is instructed to be quick to dump the ball off in the flats to Saquon Barkley rather than risk getting hurt. They finally got rid of Manning; they certainly don’t want to be forced to bring him back.

As a result, he will end up throwing and completing a lot of passes—take the over on both. However, it may not be as simple to assume he will cover the over on yards. Tampa Bay’s defense did let Cam Newton throw for 300+, but they held Jimmy Garoppolo to under 200.

With Evan Engram, Barkley, and it appears Sterling Shepard catching most of his passes this week, he could crack 260.5 yards—but it will be close. Take the over (reluctantly).