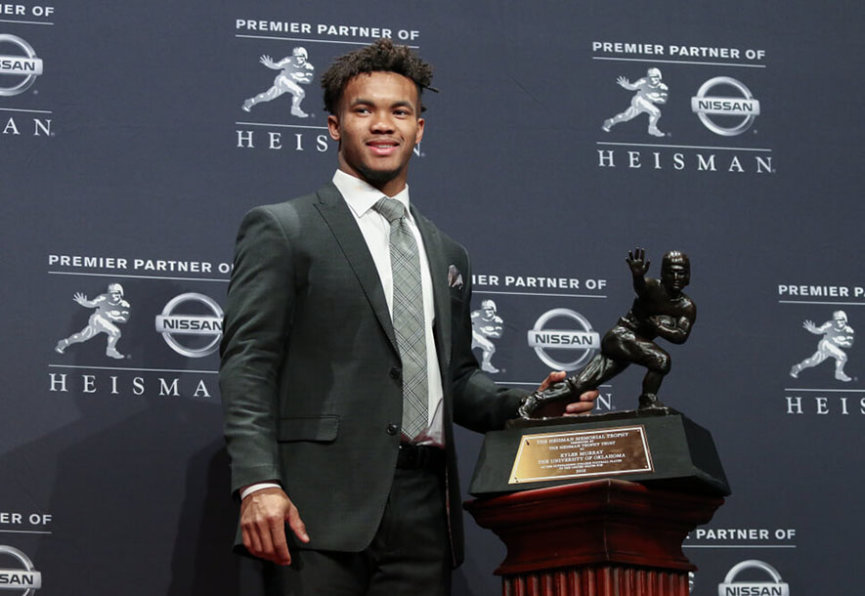 When the NFL season began, the race for Offensive Rookie of the Year was expected to be pretty cut and dry—it was Arizona Cardinals quarterback Kyler Murray against everyone else. The No. 1 pick in the draft and reigning Heisman Trophy winner was expected to sparkle in Kliff Kingsbury’s scheme.

Kyler Murray, winner of the 84th Heisman Trophy, poses with the trophy on December 8, 2018 at the Marriott Marquis in New York City

Five weeks in, he has been—not bad. There have been moments where he was must-see TV, but there have been others where he looked like a rookie in over his head. But since no one else has been overly impressive (at least with any consistency), he remains the favorite.

However, that could very well change in the weeks to come with how a few guys have been playing.

According to BetOnline.ag, the odds for Offensive Rookie of the Year are as follows:

After his first two starts, Daniel Jones had moved ahead of Murray, but then a poor outing last week coupled with a Cardinals win allowed Murray to retake the lead. So—who is going to win? Who is worth putting money down on?

Some of the above players are easy to eliminate from contention—like Eagles running back Miles Sanders. Five games in and he has yet to score a touchdown, has totaled 100+ all-purpose yards once and has only gained 193 yards on the ground. It will take a massive shift in touches in his favor for him to even have the opportunity to earn OROY honors.

Chiefs wide receiver Mecole Hardman isn’t getting enough opportunities either. He’s had a few big plays but only has 12 catches through five games (for 246 yards and two touchdowns). Mahomes seems more interested in throwing to second-year man Byron Pringle than Hardman.

In the first two weeks, Ravens receiver Marquise Brown looked like a strong candidate. But since starting the season with 12 catches for 233 yards and two touchdowns in the first two games, he’s caught nine (21 targets) for 93 yards and one touchdown. Yeah—he’s out unless the Ravens make him the focal point of the offence, and that is not going to happen.

Why David Montgomery still has +1000 odds is a mystery. The Bears rookie running back has yet to have a significant impact on a game. His single game-high is just 67 yards, and with 69 carries to his name, he is averaging a pedestrian 3.3 yards a carry.

What About Dwayne Haskins?

As a rookie quarterback selected in the first round, many expected him to play sooner rather than later. Instead, he has made only one appearance, and it wasn’t a very good one. While Jay Gruden isn’t in Washington holding him back, rumor has it the team is not going to be playing him anytime soon.

But somehow, his odds continue to get shorter. Back on September 25, they were around +3900. Since Gruden was fired, they got a little shorter, +2800.

However, there is no reason why anyone should waste money betting on him. Even if he was ready to start, the Redskins offence is so dreadful there is no way he shines enough to win OROY.

Year Of The Wide Receiver?

It would not be hard to make a case five weeks in for A.J. Brown, Terry McLaurin, and D.K. Metcalf to be legitimate candidates for OROY honors. All three have had good games and have made big plays for their respective teams.

But Brown is going to be held back by his inconsistent quarterback, Marcus Mariota. Terry McLaurin has played well despite his team’s quarterback and coaching issues. However, it is hard to imagine him maintaining a high enough level of production all year long.

As for Metcalf, he has made some big plays for the Seahawks but only has 12 catches through five games. He’ll need to do a lot better over the rest of the season to be in contention when the regular season ends.

Kyler Murray, Gardner Minshew II, Josh Jacobs, and Daniel Jones are the only guys left. So—who deserves it so far?

Murray has had his moments, but he hasn’t had enough to warrant being the front runner still let alone winner. Minshew started the season just happy to be on the roster, but an injury to Nick Foles gave him an opportunity, and he’s made the most of it.

The Jaguars are 2-3 and a game out of first in the AFC South—a division they could easily win still, thanks to Minshew. As for Jones, his first two games were good, but last week was a real dud. He will need to show he can play consistently well before betting on him.

With 430 yards rushing to his name and a 4.9 yards per carry average, Josh Jacobs is off to a good start. If he can keep it up, his odds will get shorter.

Our Offensive Rookie Of The Year Betting Tip/Prediction

Right now, the smart money is on either Minshew or Jacobs. Both are going to have the opportunity to play and have been playing well so far. Murray hasn’t been consistent enough, and neither has Jones. At +650, Jacobs definitely has value.

But Minshew is the better bet of the two.