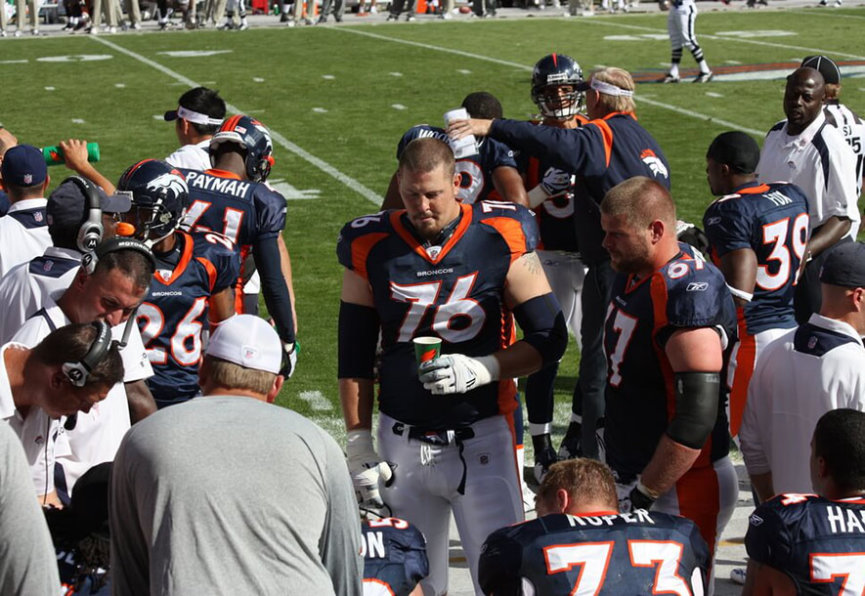 The Denver Broncos recently became the first NFL team to report to training camp and start practicing. But in the days and weeks ahead, the rest of the NFL will follow suit, and then the yearly nightmare of life without football will come to an end.

But for some fans, the nightmare may be right around the corner. While every team starts the season on equal footing, as soon as the first few weeks are out of the way, teams start to rise while others fall. The chance of success will fade away, and another losing season will become a stark reality for many fans.

That could certainly be the case for fans in the AFC West where it already looks like the division is a two-team race.

The AFC West is certainly a tale of two teams; it has two teams many believe could contend for the AFC’s spot in the Super Bowl and two teams that might as well start planning for next year. The odds on who will win the division reflect that (odds via BetOnline.ag):

It comes as no surprise that the Chiefs are a heavy favorite to repeat as division champs. Philip Rivers and the Chargers should be back in the mix as well. But is there any chance the Broncos or Raiders even put up a fight? Or should you go ahead and bet on either the Chiefs or Chargers to win the division?

Examining each team should help make the decision easier.

Gruden inherited some good players but has traded away most of them—except for Derek Carr. Prior to Gruden’s arrival, Carr’s star appeared to be on the rise. But since Gruden took over, it has dimmed considerably.

But with the bevy of talent the team acquired for both sides of the ball in free agency and the draft, Carr and the Raiders could very well become a force to be reckoned with. Of course, the trick isn’t necessarily gathering the talent; it’s getting them to play like a team.

However, with a coach as respected as Jon Gruden, maybe the Raiders can competitive this season. They have a lot of new pieces, but if they can get on the same page and live up to their reputations, the Raiders could be dangerous.

Someone goes from worst to first every season.

The Broncos have been searching for a franchise quarterback and hope that they finally have one in Drew Lock. But until he is ready to go, they are hoping Joe Flacco can breathe some life into the offense.

They will likely lean on the running game again this season, but if their young receivers can step up (Courtland Sutton and DaeSean Hamilton), along with Emmanuel Sanders, the Denver passing game could be good.

Assuming Vic Fangio can work his magic on the defense (which still has quite a few great players), there is no reason to think the Broncos can’t compete this season. A lot of things will have to go their way, but if they do, the Broncos could surprise a few people.

The Chargers were an excellent team last season; a rarity in that they were good at everything but not great at anything. Had they not been in the same division with the Chiefs, they could have won any division in the AFC.

But the Patriots (in the AFC Championship game) and the Chiefs are proof that just being good is not good enough. So—how did the Chargers become better in the offseason?

Their only significant free-agent loss was wide receiver Tyrell Williams, but that means Mike Williams will have additional opportunities to step up as will Travis Benjamin. Otherwise, as far as their offseason goes, they added a lot of depth on the defensive side of the ball

They have a potential problem brewing if Melvin Gordon decides to holdout. If he doesn’t, then fans should expect to see the excellent team from last year return mostly intact.

The Chiefs got some great news recently with the NFL announcing that Tyreek Hill is not going to face a suspension. That means the offense will be ready to dominate from Week One. However, it may not matter if the defense hasn’t improved.

The most significant move they made to improve last season’s defense was hire a new defensive coordinator, Steve Spagnuolo. His defense was a large part of the reason why the Giants beat the Patriots in Super Bowl XLII. But otherwise, he doesn’t have a lot of experience as a coordinator

So, it remains to be seen how much the Chiefs defense will improve under him. But even if it doesn’t, the Chiefs will still be in contention because of their offense.

So—is it a two-team race in the AFC West? Probably. Denver and Oakland have a ton of potential, but both are going to need quite a few things to go their way for them to compete. While the Chiefs will be a good team once again, Mahomes is going to regress. That will be the opening Philip Rivers needs.