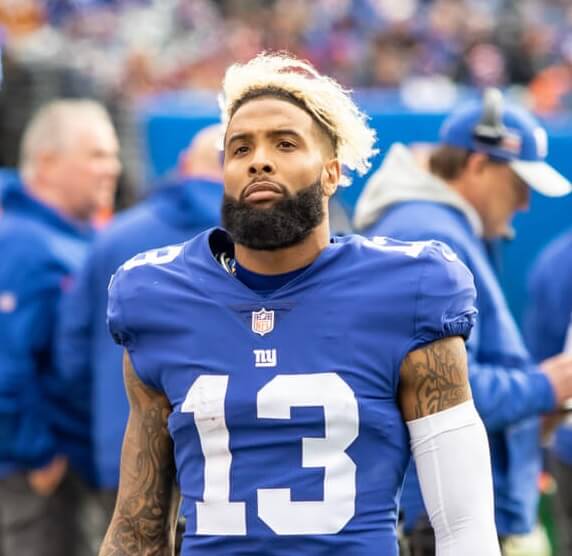 For the last couple of off-seasons, much of the news about the New York Giants has been about wide receiver Odell Beckham Jr. Was the team going to resign him? How much were they going to pay him? Would the team get tired of his antics and off-field issues and get rid of him?

Did he have a future with the Giants?

The question appeared to be answered when the team signed him to a five-year, $95 million contract making him the highest paid wide receiver in NFL history. When he was still asked questions about OBJ’s future with the team, general manager David Gettleman laughed.

But then Jay Glazer of The Athletic predicted that OBJ would be traded during the offseason. For some reason, people have taken his prediction and treated it as more than what it is—what one person thinks is going to happen.

As the speculation began to build, it was only a matter of time before someone posted odds on where Odell Beckham Jr. would play next season.

Oddsmakers at BetOnline.ag have posted the following odds on what team OBJ will be playing for in Week One of the NFL regular season next year:

Jerry Jones will not give up another first-round pick along with Zach Martin or Travis Frederick (which is probably what it would take) for another wide receiver.

Cleveland has the cap space to handle his contract, but they would have to give up too many of their talented, young players to make a trade happen. They are more likely to stand pat.

OBJ would be a waste in Chicago, Buffalo, Arizona, or with the Jets. None of them have the kind of passing game that a player like OBJ would thrive in.

As for Pittsburgh, a one-for-one involving OBJ and Antonio Brown would be intriguing. But do the Steelers want to get rid of one diva for another? No.

That leaves the Raiders, Dolphins, 49ers, and Giants.

The Dolphins don’t have a marquee receiver and could really use one. But they also have a huge question mark at quarterback they need to resolve first. Could having a guy like OBJ to work with finally bring out the best Ryan Tannehill has to offer?

Maybe, but it would be a lot more fun to watch him catch darts from Kyler Murray next season.

The Raiders are in serious need of help in the wide receiver room as well. But since Oakland does have an established, talented quarterback in Derek Carr, they could be seen as a better bet. However, before pulling the trigger, Jon Gruden will need to figure out if he wants to build around Carr or not.

But more than likely, OBJ is not going anywhere. The whole discussion on the possibility of him being traded is based on someone’s ‘bold’ prediction. Some have assumed that it is based on something legitimate since Glazer tends to be pretty plugged in.

But without Glazer sharing what his sources are (assuming there are any), we’ll never know.

The possibility of a trade involving OBJ is something that was created in order to give the media something to talk about while counting the days until the Combine. Don’t bet on Odell Beckham Jr. going anywhere.

He will be lining up for the New York Giants in Week One next season.