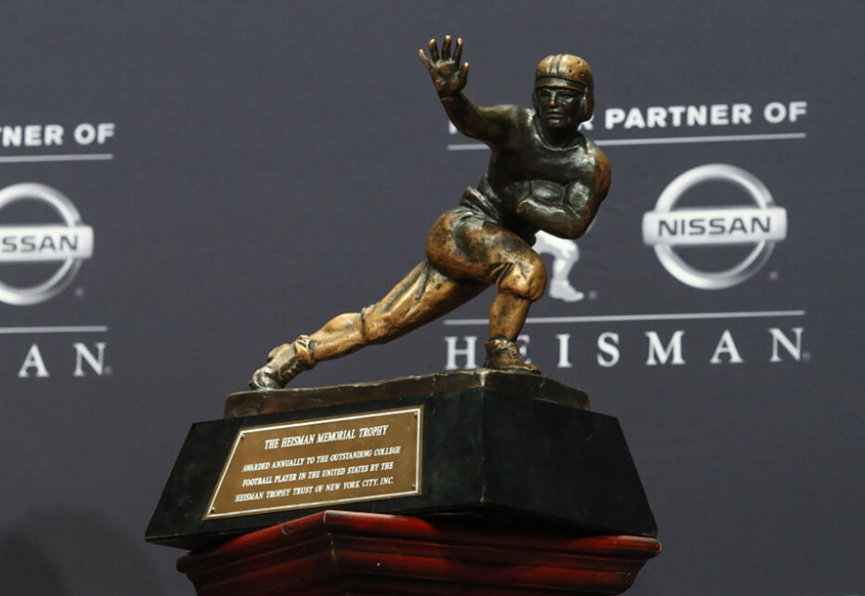 College football is almost here, which means we are just a few months away from watching Alabama and Clemson face off once again for the national championship. Oddsmakers think that is how the season is going to play out, and it is hard to argue with them.

But it is a whole lot easier to make a case for someone other than the two preseason favorites, Clemson’s Trevor Lawrence (+300) and Alabama’s Tua Tagovailoa (+250), to win the Heisman Trophy this year.

Why not go with one of the preseason favorites?

The reason is simple— preseason Heisman Trophy favorites seldom win. Marcus Mariota was the last to do so back in 2014. Since 2009 the preseason favorite is more likely going to be sitting at home on award night rather than make the cut as a finalist.

It isn’t that the preseason favorites fall from grace after having bad years. They usually do just fine. But since our expectations of them are higher, unless they really stand out, they often get overlooked in the end.

So, never go with a preseason favorite?

Never say never, of course. Tagovailoa and Lawrence are both tremendous players that could easily have a season worthy of winning the Heisman Trophy. But, since history does not shine kindly down on preseason favorites, it may be wise to hedge any bet on either of them with another wager on a longshot.

There are always several intriguing dark horse Heisman candidates each season. These are players with the potential for greatness or ones that have flashed that potential in the past. If certain things go their way this season, they could have an award-worthy season.

The odds on who will win the Heisman this season, according to BetOnline.ag, are as follows:

Of the above players, the two favorites are far and away the best bets in the bunch. But Jalen Hurts is an intriguing option as well.  He has yet to officially be named the starter for Oklahoma this season, but with his background coming from Alabama, it is hard to imagine Lincoln Riley starting anyone else.

With his experience and talent inside Riley’s offense, Hurts could potentially do amazing things.

The following are seven potential dark horse Heisman candidates. While they did not warrant having odds placed on them by BetOnline.ag (except for Patterson), they were given odds by 888sport.com: 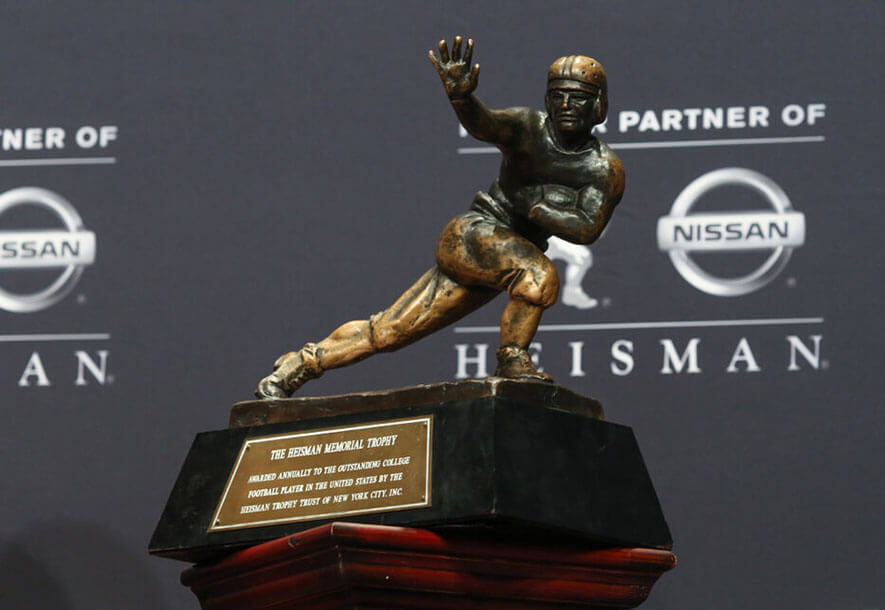 Who will win the Heisman trophy this year? | Debby Wong / Shutterstock.com

Each one plays for a team that is expected to be good in 2019. But if things go right for the team (and the candidate), the team could end up having a great year. However, the key to success and gridiron glory is ‘if’ things go right.

About the Dark Horses

Patterson did now ‘wow’ as expected in his first season under Jim Harbaugh at Michigan. But with another year of teaching under his belt, if he can start off better than he did last year, he could turn into a strong candidate.

A similar case could be made for Joe Burrow at LSU. He got off to a slow start last season (his first with the Tigers), but as the season went on his play improved. If he can lead the Tigers to a spot in the SEC Championship game, his name will be in the Heisman conversation.

Khalil Tate appeared destined for greatness after exploding onto the scene in 2017. But an ankle injury hampered his effectiveness last season. He played well enough in ’17 to have +2500 odds to win that year.

Tate Martell has yet to play for the Hurricanes in Miami, but if he can live up to his recruitment hype, he has a shot. J.K. Dobbins had odds as low as +1500 in ’17 and +2000 last season; if he gets the lion share of the carries for the Buckeyes, his odds will get better.

Kelly Bryant played well enough for Clemson back in 2017 to briefly become a longshot candidate. He will need to play even better for Missouri this season to have a shot and should be fun to watch. However, if you want a strong dark horse candidate worth betting on, look no further than Texas A&M quarterback Kellen Mond.

One offseason under Jimbo Fisher’s watchful eye did wonders for Mond last season. If he can make even more progress this year, then the Aggies might have a shot at surviving a schedule that includes Clemson, Alabama, Georgia, and LSU.

If they do, and the odds on that are long, it will be because of Mond. Should he lead the Aggies to wins in three of those games, his name will deserve to be in Heisman conversations.