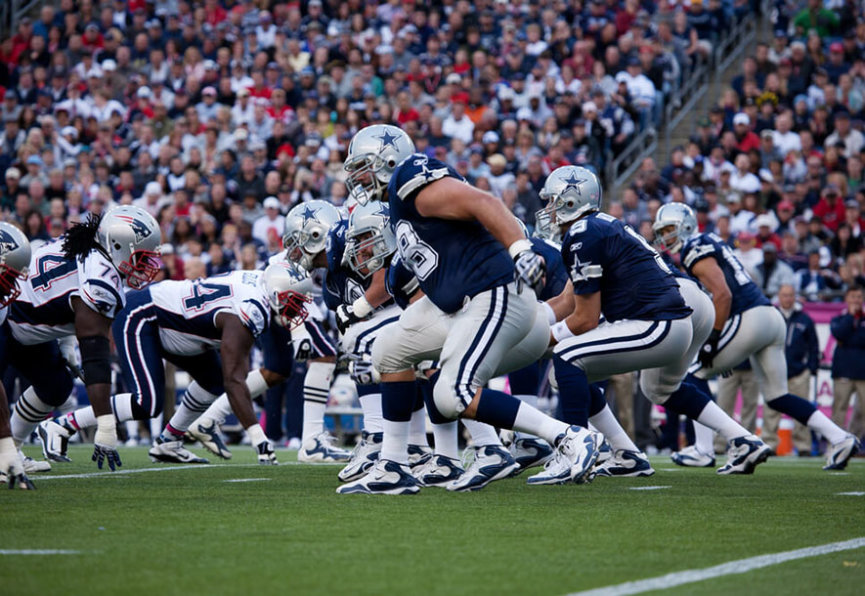 Yet another exciting week in the National Football League is ahead of us. Dallas Cowboys will be looking to make amends for a 34-24 loss to Green Bay Packers when they take on New York Jets at MetLife Stadium on Sunday, whilst high-flying New England Patriots play host to New York Giants at their Gillette Stadium in NFL Week 6. San Francisco 49ers are eyeing their fourth consecutive win in the 2019 NFL season at Los Angeles Rams, but this match will be anything but a walk in the park for Kyle Shanahan’s troops.

Cowboys suffered a dip in form in NFL

Dallas Cowboys made a flying start to the new NFL season, with the team beating the likes of New York Giants (35-17), Washington Redskins (31-21) and Miami Dolphins (31-6), but, all of a sudden they suffered a dip in form. Following a 12-10 loss to New Orleans Saints at Mercedes-Benz Superdome, Jason Garrett’s men were beaten by Green Bay Packers at home ground at the weekend.

Canadian players from Dallas Cowboys Christian Covington. L.P. Ladouceur and Tyrone Crawford travel to New York City in Week 6 as they take on Jets at MetLife Stadium. Jason Garrett’s troops will not have a better chance than this to get back on course as New York Jets are on a four-game losing run ahead of Sunday’s clash. You should know that Dallas Cowboys are just -417 at William Hill to beat the Jets.

Entony Auclair and his Tampa Bay Buccaneers were beaten by David Onyemata’s New Orleans Saints 31-24 in Week 5 and they face an uphill task in Sunday’s encounter with Carolina Panthers. The Saints, on the other hand, are brimming with confidence ahead of the trip to Jacksonville. Our Eli Ankou and his teammates were beaten by Carolina Panthers 34-27 at the weekend.

Check out all NFL Week 5 results:

Several players picked up knocks in Week 5, but some of them will recover in time to face their next rivals.

Dallas Cowboys are eager to return to winning ways following back-to-back defeats to the likes of Green Bay Packers and New Orleans Saints and seeing that their next rivals New York Jets are low on confidence following a heavy 31-6 loss to Philadelphia Eagles, we believe that there is a big value in betting on Jason Garrett’s team. The Cowboys are -125 to cover the spread of -7.

Los Angeles Chargers will be looking to bounce back from a 20-13 loss to Denver Broncos when they welcome Pittsburgh Steelers at Dignity Health Sports Park. Anthony Lynn’s men aim to take advantage of the fact that the visitors are without quarter-back Mason Rudolph and they are likely to emerge triumphant in Sunday’s clash. We recommend you to back Los Angeles Chargers -6 at -125.