One of the most prestigious non-Grand Slam events in both the ATP and WTA circuits, the BNP Paribas Open, popularly known as the Indian Wells Open, is once again expected to produce top-notch tennis with the world’s best netters gunning for ranking points, prize money, and bragging rights.

BNP Paribas Open 2019 will begin on March 4 through March 17 at the Indian Wells Tennis Garden in Indian Wells, California. Classified both as an ATP Masters 1000 and WTA Premiere Mandatory event, the tournament pits the elites and rising stars of the game through two weeks of ultra-competitive tennis until the victor emerges from the men’s and women’s brackets.

For bettors, the BNP Paribas presents a perfect opportunity to earn significant winnings with so many intriguing matches on the schedule. The top 75 players on the ATP and WTA world rankings are given outright entry in the tournament while the remaining slots will be contested through qualifying draw or given via wildcard invitation. 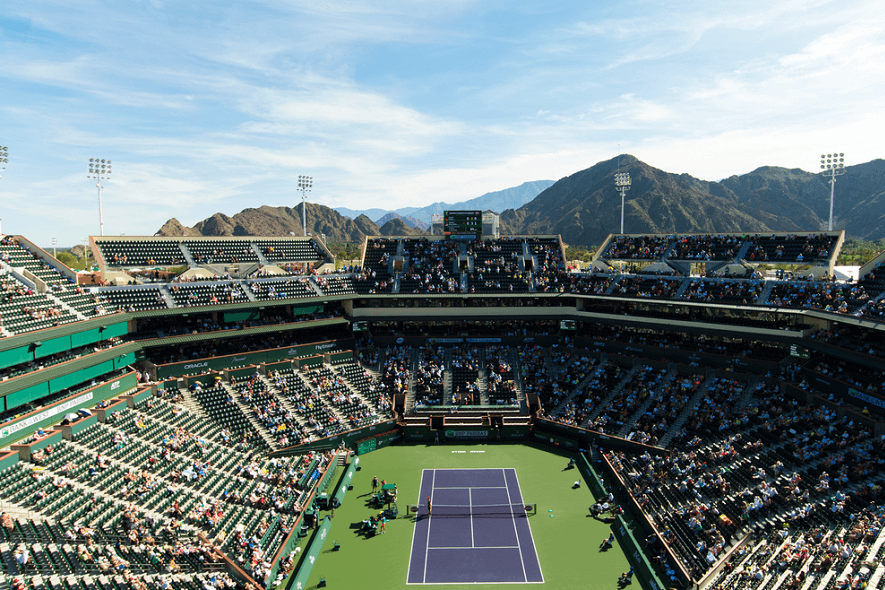 Juan Martin Del Potro, who skipped last month’s Australian Open championships because of a lingering knee injury from last year, is set to defend his BNP Paribas men’s singles crown. Del Potro already made his 2019 season debut at the Delray Beach Open, and although he was knocked off in the quarterfinal round after losing to American Mackenzie McDonald in three sets 4-6, 6-3, 6-7, the Argentine is still viewed among the contenders in the men’s singles tourney.

Novak Djokovic is the early top favorite to win the tournament after bagging his seventh Australian Open championship. Djokovic, a five-time Indian Wells Open winner, has been scintillating form since the second half of 2018 as he captured the Wimbledon Open, US Open and Australian Open. Nevertheless, the top-ranked men’s singles player will be facing enormous challenge from his chief rivals Rafael Nadal and Roger Federer, and up-and-coming stars like Stefanos Tsitsipas, Milos Raonic, Dominic Thiem and Alexander Zverev. Seasoned veterans like Del Potro, Kevin Anderson, Kei Nishikori, John Isner and Marin Cilic shouldn’t be slept on either as any of these players can pull off a surprise in the tournament.

Of course, all eyes will be on Naomi Osaka as she tries to become champion for the second consecutive year. Osaka, the reigning US and Australian Open champion, has been blazing hot ever since her maiden Grand Slam title in Flushing Meadows. And although she suffered some sort of a setback after losing to Kristina Mladenovic of France 6-3, 6-3 in the round-of-32 of the Dubai Tennis Championships, the World’s No.1 women’s singles player is still expected to be the overwhelming favourite at Indian Wells.

Ready to challenge the Japanese sensation is a plethora of veteran campaigners who are all eager to stop Osaka’s budding dynasty in the women’s single competition. First on the list is none other than Serena Williams. The former queen of the WTA circuit is slowly but surely regaining her old self after giving birth in 2017. She reached the finals of the 2018 Wimbledon and US Open and then the quarterfinals of the Australian Open. Williams is currently ranked No.11 in the WTA world ranking, but everybody knows she’s more than capable of putting together a title run. Another player to watch out is Simona Halep, who won the Indian Wells crown in 2015. It has been a see-saw start for the Romanian this 2019 season after she came short at the Australian Open, Qatar Open and Dubai Tennis Championships. But again, Halep ‘s track record as a former world’s no.1 and a Grand Slam winner makes her still a very dangerous opponent for anyone.

Sloane Stephens, Petra Kvitova, Karolina Pliskova and Angelique Kerber would spice up the women’s draw that lost some star power with the withdrawal of Maria Sharapova due to a nagging shoulder injury.

Factors to Consider Before Betting on the BNP Paribas Open

Before going all in on any player, it would be wise to know first about his/her fitness or form. Oftentimes, bettors tend to bank on the player’s popularity or past accomplishments without considering his current condition.

For example, there’s a reason why Djokovic is the top favourite in the men’s draw heading into the BNP Paribas Open. He has been winning tournaments left and right, and seems to have 100 percent recovered from the injuries he had in previous years. As for Nadal, everybody should be extra cautious about his injured knee that put him on shelf for several months before returning in last month’s Australian Open. Based on his track record with bettors, Nadal has always been a good bet to win any tourney as long as he is in tip-top shape. Federer, meanwhile, could be sneaky good at Indian Wells. He might have only reached the round-of-16 of the Australian Open courtesy of rising star Stefanos Tsitsipas, yet there’s still an aura of invisibility surrounding the Swiss Master every time a big tournament comes around. Out of several up-and-coming stars, Alexander Zverev might be the ripest to win this tournament. He came close to winning an ATP Masters 1000 event last year when he reached the finals of the Miami Masters, where he lost in three sets to John Isner.

On the distaff side, Osaka would be a safe bet to go all the way to deeper rounds, though it’s far from guaranteed if she’s going to end up as back-to-back champion. The caliber of competition is expected to be a notch higher with the return of Serena Williams and the entry top-tier rivals. Kvitova and Halep should be viewed as darkhorse contenders, more so if they get lucky in the draw.

Type of Bets Available During the BNP Paribas Open

It’s true that BNP Paribas Open isn’t one of the four Grand Slam tournaments on the tennis calendar; nevertheless the tournament is considered a top-tier event among players, fans and bettors.

Bettors will have plenty of options when it comes to wagering on their favourite tennis players on the men’s and women’s draw. A betting newbie or a pro, one must be aware of checking out the different kinds of bet during the two-week competition in Indian Wells. Let’s check out the different forms of bet that most online bookmakers will offer during the 2019 BNP Paribas Open.

Outright bet is a bet placed on the result of an entire league or competition rather than on an individual game. Outright bets are usually placed before the tournament starts but are also available even during the course of the competition. This is undoubtedly one of the simplest forms of betting; however it does take some patience. Payouts are usually higher in outright betting because of the amount of risk involved. Unlike individual matches, players have to win consecutive matches to come out on top. In this form of betting, the likes of Novak Djokovic, Roger Federer, Rafael Nadal, Serena Williams and Naomi Osaka are strong pickups because of their dominant track record.

Another simple form of betting, match betting simply allows bettors to pick their favourite players to win an individual match regardless of the outcome of his/her campaign. There are only two options in match betting, it’s either player A or player B and there is no draw. The player’s position in the world ranking and the results of their recent campaign play a big factor in the odds released by bookmakers.

Handicap betting is a form of sports betting used to neutralize the contest when there is a huge gap in strength between two competitors. For example, customers can be on Rafael Nadal to win his opening round match at this year’s BNP Paribas Open by 3.5 games more than his opponent, or vice versa.

Winning margin betting is when you place a bet where you predict how many games or sets the player will win with. To give you a simple example, if you bet on Novak Djokovic to win by 3.5 games in first set, the only way you would win is for Djokovic to win the opening set 6-3. This type of betting requires a vast knowledge of tennis and familiarity with their favourite tennis player. The payout is usually good in winning margin betting but the risk involved is way higher than any types of betting.

In-Play or in-running betting. In-play betting (or in-running or live betting as it is also known) is betting while the match is being players. For example, a bet on Roger Federer going into the fourth game of the first set while leading 2-1. In short, In Play Betting allows bettors to bet on the winner of the next point, game, set or match. It has become very popular among betting customers who spend their time watching tennis events on consistent basis.