Cricket is the most popular game in the world right after soccer. Evidently, it has a huge demand in the betting community. Let us walk you through the most crucial points of cricket so that you can bet successfully.

The English introduced this game to the world way back in the 16th century. A reference to cricket mentioned in a 1958 court case confirmed this. The game then gained international fame and momentum in the 19th and 20th centuries. It is a game of bat and ball where the batsman of one team strikes the ball thrown by another team. The score is settled by determining where the stricken ball has landed. A wicket is scored if the ball goes through the three wooden sticks behind the batsman (called wicket stump) or if it lands in the hands of an opposing team member before touching the ground. A successful wicket means the current batsman on field has to go back to his dressing room and let the next batsman come on the pitch to continue the innings.

There are mainly three types of cricket – one day international (ODI), test series and Twenty20 (T20). ODIs tend to be the most popular among all these forms since they don’t take up much time from the audience and manages to give them a nail-biting match nonetheless. An ODI completes the match within two innings, each of 50 overs. The test series can go on for days while the T20 takes only 20 overs from each side.

Cricket is primarily played in the UK, Australia, Afghanistan, West Indies, South Africa, New Zealand and Asian countries. However, it has managed to build a pretty large fanbase in Canada as well. Canada started playing international cricket back in 1844 by playing against the USA. They made their First Class debut in Toronto, 1951 and finally reached the List A in 1979 by playing against Pakistan during the ICC trophy. The International Cricket Council (ICC) announced Canada as one of their associate members in 1968. So far we have seen them in four World Cup series which is the biggest tournament in the cricket universe. They managed to cement the runner-up spots in 1979 and 2009. They also started their Twenty20 or T20 journey in 2008 along with many other cricket-playing nations. In April of 2018, they officially achieved the Twenty20 International or T20I status from ICC.

How To Bet On Cricket?

Unlike most other betting sports, cricket has a multitude of bets you can take advantage of. In addition to betting on the outright winners, there are many other types of bets available in this sports. Let’s discover the most prominent ones here: 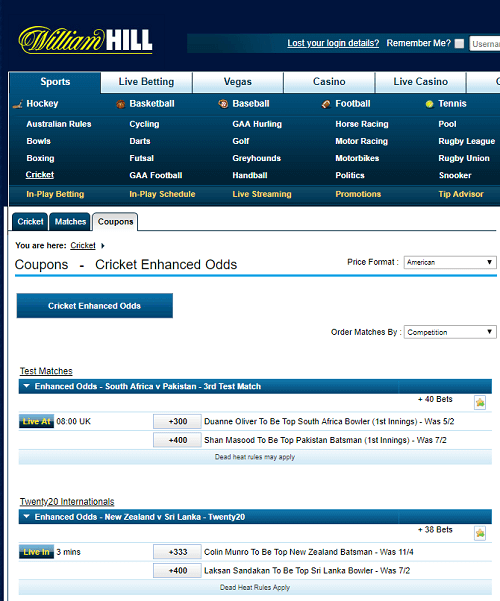 The most basic bet can be on who is going to win the ongoing or future series. A series can consist of many kinds of cricket matches. It can combine one to three matches of test, ODI and T20. Series take place as part of an international tournament under a brand. They can also take place with only 2 to 4 participating nations organized by one of those teams. You can bet on which of the participating countries will take away the trophy.

If you don’t want to go that far by betting on the whole series, you can bet on one match at a time. Before a match begins, you can make the bet depending on the team’s track record, which of their players are participating, what is the weather condition at match venue etc.

Before any match of cricket begins, there is a toss to determine which of the two teams will go first. A coin is tossed in the air by one of the anchors on field and each team calls heads or tails. The one who wins gets to choose if they will go batting first or fielding first. The punters can make a bet on who will win this toss based on previous records and sheer instinct.

Man of the Match

One of the eleven players on the winning side earns the prestigious title of “Man of the Match” or MOM when the match ends. This can be pretty hard to predict since a debutant may also end up winning this title by displaying the best spell of runs and wickets.

At any point in the game, you can bet on who will be the next wicket to fall, which bowler will score that wicket and what kind of wicket it will be. A wicket can be of many types including LBW, run out, caught, bowled and stumped. Besides, there are only two batsmen playing at a time. So you can bet on multiple criteria for the next wicket.

Centuries (100) and half-centuries (50) are a big deal for the cricket-lovers. Many times, the performance of a batsman is judged by how many of these he has scored in his career. In every match, passing either of these milestones seems of great value for both the player and the spectators. So betting on 50s and 100s is a common phenomenon in cricket betting.

Depending on the total runs scored by each team in their previous matches, you can have an idea about how much they can score in one innings on the upcoming match. The kind of pitch and the presence of their star players also have a role to play here.

There are many other betting variations for cricket including the highest number of sixes for a batsman, total runs made in the first over, runs made till the first wicket and most runouts for a team.

As we have explained above, the betting market of cricket has many divisions due to so many types of bets in play. The market can be divided into two major areas as follows:

As the name implies, this market has to deal with the specific matches. It consists of bets like match winner, man of the match, highest opening partnership etc. All these bets have to wait till the match has ended to reach a decision and that is why they belong to the match market.

This market deals with bets which don’t need to depend on the completion of a match to decide which punter won. Its interests are limited within one innings like total run scored by one team, number of wickets a bowler took, top batsman of a team etc.

The sportsbooks often represent the odds for a cricket match in decimals. It goes something like: England playing against Australia is at the odds of 1.67. This suggests how much chance England has to win over Australia. If you want to see it as a percentage, then break the decimals down in the following manner:

Understandably, it’s not possible for the bettors to do such calculation every time they see the odds. That is why you need to make the habit of converting them mentally. The punters who have been betting for years have already learned it through long-term practices and experiences.

You can figure out your possible profit amount from the odds by this formula:

So if you have placed the stake of $10 on England in the previous example match and England wins, your estimated profit will be:

Many national and international tournaments take place all year round in cricket. These tournaments include many bilateral and tri-nation series. Apart from them, the following three tournaments are globally considered to be the biggest events of cricket:

This is the biggest celebration of cricket and takes place once every four years. It first took place in England, 1975 with 20 teams. This event deals with only ODIs. There are separate global tournaments concerned with T20s. ICC organizes this event in a different country on each new edition. Currently, only 10 cricket-playing countries can participate in this tournament. It has preliminary qualification rounds before starting the main tournament. The lowest ranked countries can have a shot at playing in the main phase if they prove themselves successfully in the qualification round.

IPL or Indian Premier League is the most sensational league tournaments in the world. Here, each team bears the name of an Indian province and represents that region throughout the tournament. The team owners bid on players from all around the world and the selected ones reach India to participate in their team matches. The player auctions, global participation, celebrity team owners and other glamorous elements of the game have made IPL an event to look forward to.

The Ashes is one of the oldest series in cricket. It was first organized in 1882 and is concerned with Test matches. Ashes series always takes place between England and Australia. The venue is set at either of the two countries every year. These teams can also bring players from other countries but it doesn’t happen very often.

The favorites in cricket can be of two types – the teams or countries and the individual players. Among the most popular countries to play cricket, India, Australia and South Africa rank the highest for all cricket-lovers. They have been consistent for a long time in all aspects including batting, fielding, bowling and wicket-keeping. In league-based games like IPL, you can bet on the best scoring teams of recent past and the players bought for each team. When it comes to individual players, both veterans and debutants tend to catch eyes in cricket.   At present, Virat Kohli, Ben Stokes, Shakib Al Hasan, David Warner and Chris Gayle have the biggest fanbase.

No matter what sport you are betting on, always set a limit for your bets. This applies to both the number of bets and the amount placed at stake for them. Never exceed this limit under any circumstance. Betting on cricket matches might be tempting especially if you genuinely love the game of cricket and you belong to a nation where it is the most popular sport. But still, hold on to your limits and never let them go.

Q: What are dead heat rules?

A: Dead Heat rules allow the reward amount of a stake to be distributed among all winners of that bet. For example, a 2-way Dead Heat will reward you half of the winning amount.

A: If your sportsbook does not support live streaming, you can turn on the cable channels and rely on them instead. Typically, the cricket-broadcasting channels ESPN, Star Sports and TEN Sports are available in all countries. Besides, there are many national and online channels who broadcast those matches as well.

Choose your sportsbook wisely so that you can stay updated on the latest matches and can benefit from the most accurate odds. Cricket covers a very competitive area in the betting world and thus, you need to have the best wager weapons at your disposal.